DanceSafe’s fentanyl testing strips use immonoassay technology to quickly and reliably detect the presence of fentanyl and many of its known analogs in a drug sample. Fentanyl and its analogs are highly potent synthetic opioids largely responsible for a dramatic increase in heroin-related fatalities. They have also been found in counterfeit pharmaceutical pills as well as cocaine and other drugs.

READ THIS FIRST! —> This page contains all the instructions for using the strips. Please read everything on this page twice before using the strips. It is important you understand what fentanyl is, why it is so dangerous, and the limitations of the strips. USING THESE STRIPS DOES NOT GUARANTEE SAFETY! No drug use is 100% safe!

Fentanyl and various fentanyl analogs are highly potent synthetic opioids between fifty and many hundreds of times stronger than heroin. They are primarily responsible for the twenty-fold increase in heroin-related fatalities since 2013. Many people have also died after consuming counterfeit pharmaceutical pills containing fentanyl, and more recently, fentanyl-laced cocaine, meth and other drugs have begun killing people.

* Note: The term “fentanyl” refers to fentanyl itself, as well as numerous analogs such as acetyl-fentanyl, furanyl-fentanyl, carfentanil, and others. Some analogs, such as carfentanil, are so strong that a fatal dose may be invisible to the naked eye. 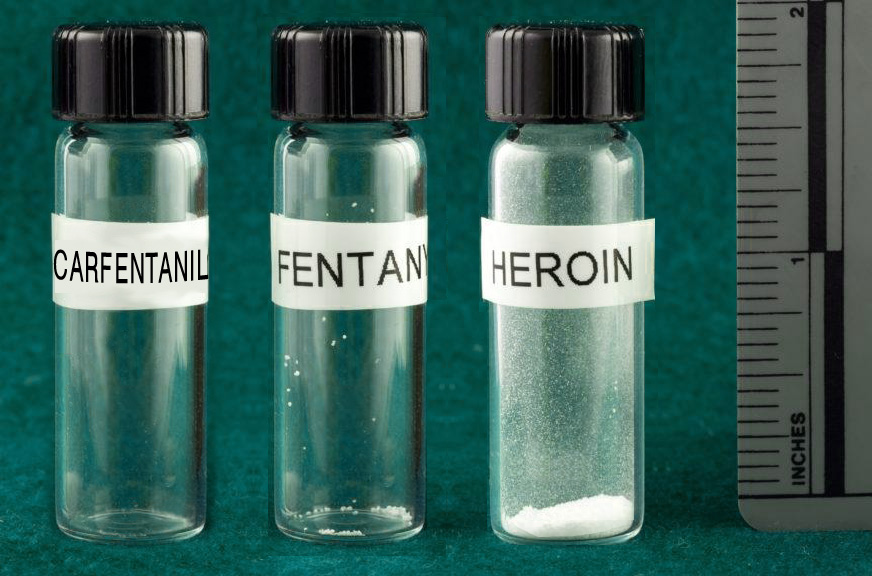 Fatal doses: Fentanyl and its analogs are so powerful a fatal dose may be invisible to the naked eye.

About Our Testing Strips

If used correctly, DanceSafe’s fentanyl testing strips can detect fentanyl and most of its known analogs, including carfentanil. However, they cannot detect all of them. A negative result, therefore, does not guarantee your drugs are free from all fentanyl analogs or other dangerous synthetic opiods.

Our strips have been verified to positively identify the following drugs:

(Click below for a full-color jpeg of these instructions, or print a hi-res PDF. ) 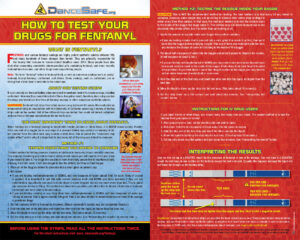 The Most Important Thing to Know About Fentanyl

When fentanyl (or a fentanyl analog) is mixed with heroin, cocaine or other drugs, it is *never* mixed evenly. Powder from one side of a baggie (or on the edge of a pressed tablet) may contain no fentanyl at all, yet powder from the other side may contain a fatal dose. This is called the “chocolate chip cookie effect” and is why it is important to test every bit of the drug you intend to consume!

Testing heroin and other injected drugs

If you inject heroin or other drugs, you should really test every time you inject. The best method is to test the residue from your spoon or cooker.

Testing cocaine and other non-injected drugs

Method #1 – Testing Everything You Intend to Consume

The best method for testing powders, crystals or tablets is to test every bit you intend to consume. This requires dissolving you entire dose in water, which means you will need to drink your dose if you decide to take it. For drugs like cocaine or meth that many people like to snort, drinking it will still work. It will take longer to feel the effects, but they will last longer.

Method #2 – Testing the residue inside your baggie.

CAUTION! This is NOT the recommended method for testing. The best method is to test every bit you intend to consume, as described above. However, some people may not be willing to dissolve their entire dose of drugs in water every time they partake. In that case, the next best method is to test the residue stuck to the inside of the baggie the drugs came in. This method may not detect fentanyl due to the chocolate chip cookie effect, but it is better than not testing at all.

One red line on top is a POSITIVE result for the presence of fentanyl or one of its analogs. Two red lines is a NEGATIVE result. No red lines (or one red line on the bottom) means the test is invalid. (Usually this happens because the liquid did not travel far enough up the testing strip.)

Disclaimer: DanceSafe’s fentanyl test strips are provided for harm reduction use only. They cannot detect every fentanyl analog, nor can they detect other synthetic opiates. A negative test result does not mean a sample is safe to consume. No drug use is 100% safe. All drug use contains inherent risks.